While spending some time tonight working with Unity's platform preprocessor defines I noticed I wasn't getting proper results when checking if the UNITY_NACL symbol was defined.  Oddly enough when I set Unity to make a Native Client build, it defined the UNITY_WEBPLAYER symbol instead. After asking on Twitter and making some Google searches, I finally found an semi-buried explanation here and this nugget in the Unity3d 4.3 release notes

This change isn't readily apparent when looking at the build window, as you can see in this picture, there isn't any information to indicate the Native Client build isn't supported.  I suspect this is the first step to phasing out NACL support entirely, similar to the removal of Flash build exports 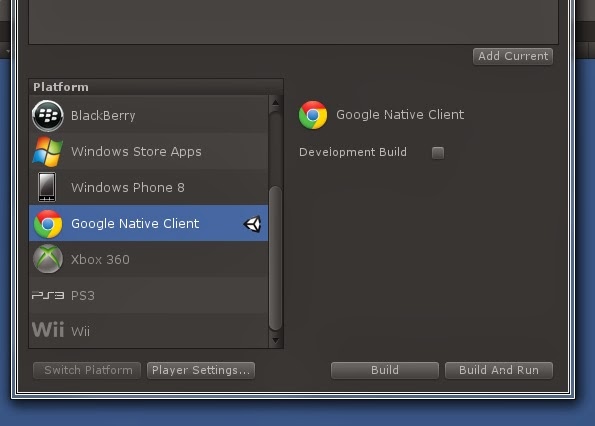 .  Hopefully this helps anyone who stumbles into this when trying to use the UNITY_NACL define
Posted by Unknown at 11:28 PM